Films normally start at 7.30pm in The Guildhall of St George, King Street.   Members and their guests can sign in from approx 7pm.

Forthcoming Film Dates for your Diary

Welcoming you back to the Guildhall! 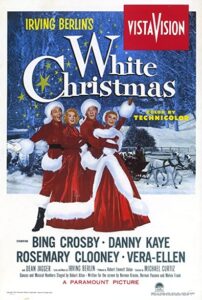 Having left the Army following W.W.II, Bob Wallace and Phil Davis team up to become a top song-and-dance act.   Davis plays matchmaker and introduces Wallace to a pair of beautiful sisters (Betty and Judy) who also have a song-and-dance act.   When Betty and Judy travel to a Vermont lodge to perform a Christmas show, Wallace and Davis follow, only to find their former commander, General Waverly, as the lodge owner.   A series of romantic mix-ups ensue as the performers try to help the General.

Thursday 13thJanuary 7.30pm
ANOTHER ROUND 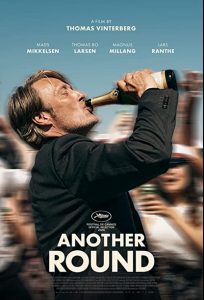 There’s a theory that we should be born with a small amount of alcohol in our blood, and that modest inebriation opens our minds to the world around us, diminishing our problems and increasing our creativity. Heartened by that theory, Martin and three of his friends, all weary high school teachers, embark on an experiment to maintain a constant level of intoxication throughout the workday.   Initial results are positive, and the teachers’ little project turns into a genuine academic study.   Both their classes and their results continue to improve, and the group feels alive again!   As the units are knocked back, some of the participants see further improvement and others go off the rails.   It becomes increasingly clear that while alcohol may have fueled great results in world history, some bold acts carry consequences. 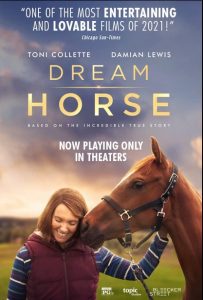 The film tells the inspiring true story of Dream Alliance, an unlikely race horse bred by small town bartender, Jan Vokes (Academy Award® nominee Toni Collette).   With very little money and no experience, Jan convinces her neighbours to chip in their meagre earnings to help raise Dream and compete with the racing elites.   Their investment pays off as Dream rises through the ranks and becomes a beacon of hope in their struggling community. 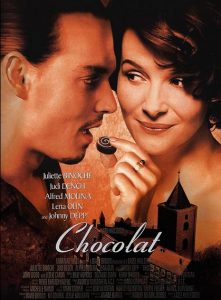 When mysterious Vianne and her child arrive in a tranquil French town in the winter of 1959, no one could have imagined the impact that she and her spirited daughter would have on the community stubbornly rooted in tradition. Within days, she opens an unusual chocolate shop, across the square from the church.   Her ability to perceive her customers’ desires and satisfy them with just the right confection, coaxes the villagers to abandon themselves to temptation — just as Lent begins. 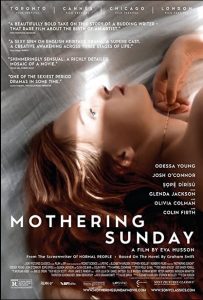 On a warm spring day in 1924, house maid and foundling Jane Fairchild (Odessa Young) finds herself alone on Mother’s Day. Her employers, Mr and Mrs Niven (Colin Firth and Olivia Colman), are out and she has the rare chance to spend an afternoon of abandon with her secret lover, Paul (Josh O’Connor), the boy from the manor house nearby who is Jane’s long-term love despite the fact that he’s engaged to be married to another woman, a childhood friend and daughter of his parents’ friends.   But events that neither can foresee will change the course of Jane’s life forever. 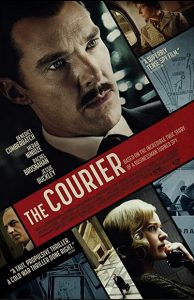 In the shadow of the Cold War a letter from Oleg Penkovsky (Merab Ninidze) an agency of the Soviet Union received by MI6 stating the concern of Penkovsky about world safety and his anxiety about a nuclear war, So Emily Donovan (Rachel Brosnahan) a CIA Agent reached out to MI6 Agent Dickie Franks (Angus Wright) , who recruited British salesman Greville Wynne (Benedict Cumberbatch) to be their spy. 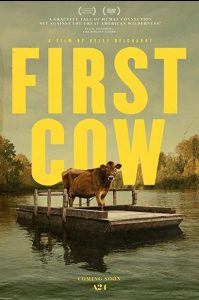 A loner and cook (John Magaro) has traveled west and joined a group of fur trappers in Oregon Territory, though he only finds connection with a Chinese immigrant (Orion Lee).   The men collaborate on a business, although its longevity is reliant upon the participation of a wealthy landowner’s prized milking cow.